"Thinking outside the box to resolve legal issues in my client’s best interest is the hallmark of my practice." 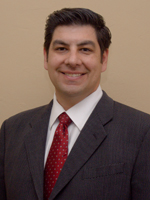 As a young United States Marine after conducting a Platoon level class, Antonio Rosacci was advised by his Platoon Commander that he should consider becoming a trial lawyer. Although thoroughly enjoying the challenges of leading Marines as a Staff Sergeant, he never forgot the words of his Platoon Commander, and Antonio decided to leave the Marine Corps in order to pursue his goal of becoming a trial attorney. Antonio attended the University of Arizona where he obtained a Bachelor of Arts degree (Cum Laude) in Philosophy and Italian, and then earned his law degree from California Western School of Law in San Diego.

Since 2000, Antonio has focused his practice on civil litigation and trial practice, including appellate practice and arguments before the Arizona Court of Appeals, the U.S. 9th Circuit Court of Appeals and the United States Court of Appeals for Veterans Claims. Antonio’s arguments made published law in Awsienko v. Cohen, 227 Ariz. 256, 257 P.3d 175 (Ariz. App. 2011). Antonio has extensive experience with complex Real Estate, Bankruptcy, Contract and Personal Injury matters before Arizona state Courts, the United States District Court of Arizona, and Federal Bankruptcy Court.

As a proud U.S. Marine Corps Veteran, Antonio is active in the local veteran community were he is involved in the ASU Homeless Legal Assistance Program with U.S. Vets, the ABA Military Pro Bono Project, U.S. Marine Corps Reserve Toys for Tots program, a member of the American Legion and a Co-Chair for the Marine Corps Scholarship Foundation (Arizona). In addition, Mr. Rosacci serves his community as a Police Officer Volunteer with the Paradise Valley Police Department and is an FBI Citizens Academy (Phoenix Division) Alumnus.